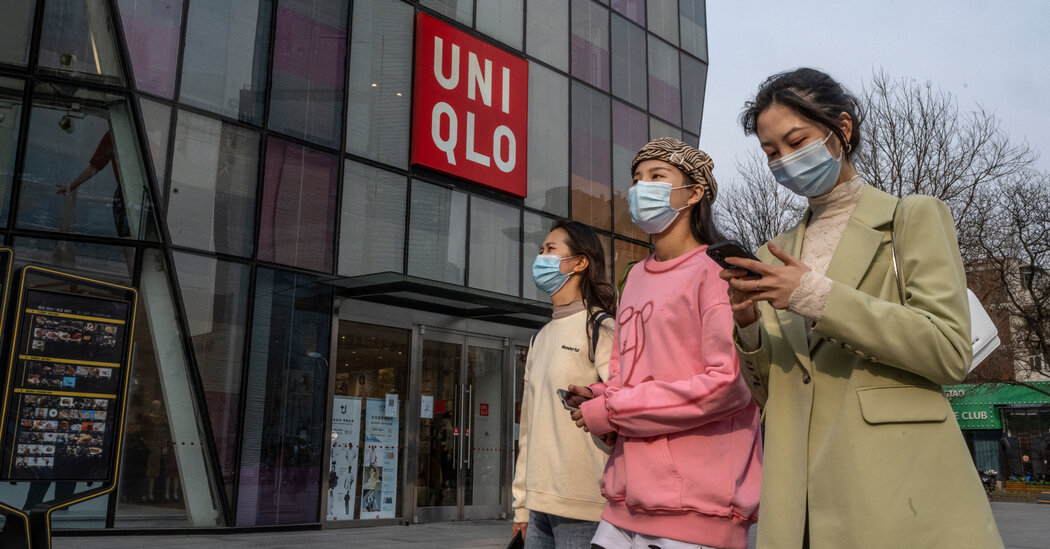 France’s antiterrorism prosecutor’s office has opened an investigation into four leading fashion retailers over suspicions that they benefited from and concealed “crimes against humanity” by using forced labor by Uyghurs in China.

The investigation by the French prosecutors started last month following accusations that the four companies — Inditex, the owner of Zara; Uniqlo; Skechers; and SMCP, which owns brands like Sandro and Maje — had profited from human rights crimes in the Xinjiang region of China, a French judicial official confirmed on Friday.

The inquiry follows an April lawsuit filed against the same four companies by human rights groups and a Uyghur woman who said she had been imprisoned in Xinjiang.

The case points to questions faced by giant fashion retailers that source clothing made around the world. Roughly one in five cotton garments sold globally contains cotton or yarn from Xinjiang, and many household names from the fashion industry face growing scrutiny for possible ties to the region — and for other forced labor abuses that have taken place in their supply chains.

China has denied all accusations of human rights violations in the region.

Both Inditex and Uniqlo strongly denied the claims made in the complaint. Skechers said it would not comment in cases of pending litigation. SMCP did not respond to a request for comment.

William Bourdon, the lawyer acting for the human rights groups, said the investigation would be a rare opportunity to force fashion companies to account for their profits.

“This probe confirms that it is possible to hold companies accountable who enrich themselves via human rights violations and then import their product into countries like France,” Mr. Bourdon said. The groups that filed the suit include Sherpa, the Éthique sur l’Étiquette collective, and the European Uyghur Institute.

The groups’ lawsuit is largely based on findings published in a report by the Australian Strategic Policy Institute in March 2020, among other documents, Mr. Bourdon said. As well as human rights violations in Xinjiang, the report identified 83 foreign and Chinese companies, including fashion brands, that it said directly or indirectly benefited from the use of Uyghur workers outside Xinjiang through potentially abusive labor transfer programs.

“We hope cases like this one will soon be seen in other countries as consumers gain better awareness of exploitation and human suffering in fashion supply chains,” Mr. Bourdon said, “and warn brands that they could be courting legal and reputational disaster if they fail to clean up their acts.”

Many international clothing brands, including Burberry, Uniqlo, H&M, Nike and Adidas, pledged last year to boycott cotton from Xinjiang, but they have since been targeted by boycott calls from Chinese consumers who seized on the renouncements of the cotton as an attack on China.

In response to the investigation, Inditex and Uniqlo both repeated their commitment to human rights.

“At Inditex, we have zero tolerance for all forms of forced labor and have established policies and procedures to ensure this practice does not take place in our supply chain,” the company said in a statement on Friday. “Inditex conducts rigorous traceability controls and we intend to fully cooperate with the French authorities to confirm that the allegations are unfounded.”

A statement from Uniqlo said that the company was “committed to protecting the human rights of people in our supply chains” and that none of its production, fabric or spinning mill partners were located in Xinjiang.

“While we have not been notified by the authorities, if and when notified, we will cooperate fully with the investigation to reaffirm there is no forced labor in our supply chains,” it said.

Uniqlo had a shipment of men’s shorts blocked earlier this year because of suspected violations of a ban on Xinjiang cotton.

In recent years, Chinese authorities have used coercive labor programs and mass internment camps to try to mold as many as one million Uyghurs, Kazakhs and other largely Muslim minorities into model workers obedient to the Communist Party. Camp inmates are forced to undergo job training, and some then take factory positions with little or no pay.

In his final months in office, President Donald J. Trump added increasingly restrictive measures on Xinjiang, including sanctions on dozens of companies doing business there and a cotton import ban from the region, citing the widespread use of forced labor. Campaigners have worked to raise awareness of the situation, including Raphaël Glucksmann, a European Parliament member who has created social media campaigns and recruited celebrities to build support in the West for the Uyghurs people.

“This is the very beginning of a long process, but it shows the multinationals that the page of impunity is turning,” Mr. Glucksmann said following news of the investigation this week. “I hope that with the specter of this legal action we will be taken even more seriously by the big brands, who will see forced labor not just as an image blow, but potentially also as a real financial and criminal blow also.”

Judicial investigations in France can take months, if not years, with many twists and turns that do not always necessarily lead to a trial.

Mr. Bourdon said it remains to be seen what penalties could be issued to the brands should they be tried and found guilty.

“Be it compensation payments, fines or something else, it is for the judge to decide,” he said.