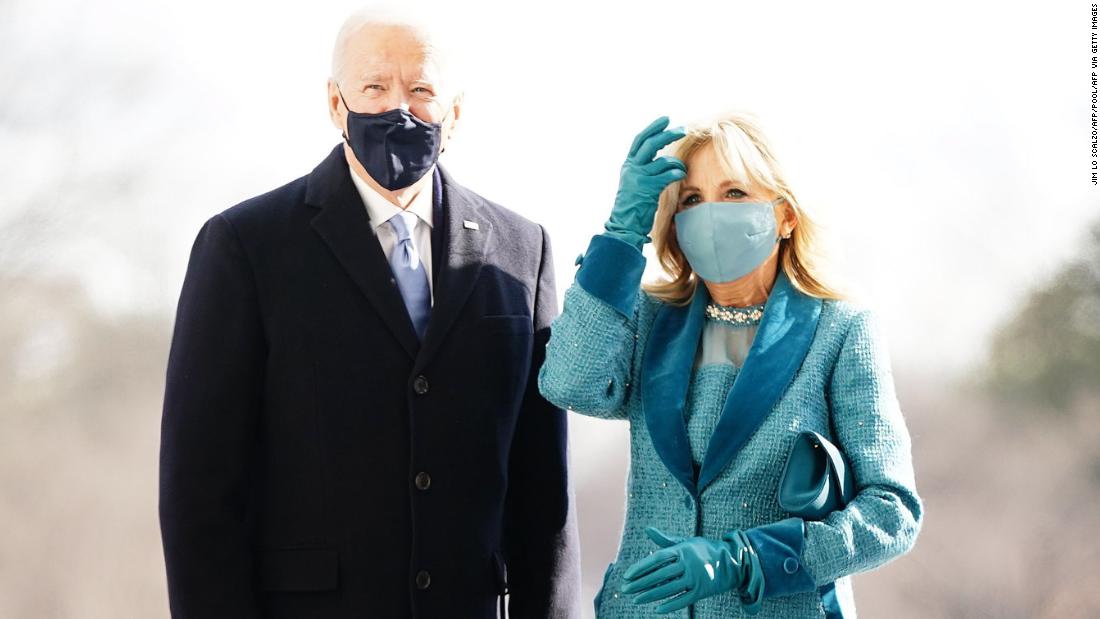 There was no shortage of striking fashion moments on Inauguration Day this year, from the shoulder smattering of crystals on Ella Emhoff’s Miu Miu coat to Amanda Gordon’s sunny Prada ensemble, each outfit choice told a story and added to the cautious celebratory spirit of the day.

First lady Jill Biden did not disappoint, quietly signaling she knows exactly how to harness the soft power potential of fashion in the three looks she wore to mark the occasion. Nodding to emerging design talent, sustainable fashion and multiculturalism, her choices hit all the right notes and contributed to a growing sense among onlookers that fashion diplomacy has returned to the American political stage.

On the eve of the inauguration, while attending a memorial for the 400,000 victims of Covid-19 in the US, the first lady opted for a dress and coat combo by Jonathan Cohen, an independent New York designer known for championing sustainability and zero-waste design.

The coat, which was made from fabric scraps from Cohen’s studio, was a magenta hue of purple — a combination of Democratic blue and Republican red that has long been understood as the color of bipartisanship. One of the official colors of the women’s suffrage movement, purple would later become a theme amongst a number of high-profile attendees on Inauguration Day, including Hillary Clinton and Michelle Obama.

On the morning of the ceremony, Biden stepped out wearing a fresh blue tweed coat with velvet cuffs and a dress embellished with Swarovski crystals and pearls. The outfit came complete with a matching face mask and was the work of another emerging designer, Colorado-born Alexandra O’Neill of the American label Markarian. In a statement sent to CNN Style, the designer said, “It is an incredible honor to dress Dr. Biden today. I am so humbled to be even a small part of American history.”

For the inauguration concert later in the evening, the first lady wore an all-white outfit comprising a dress, coat and matching white gloves by Gabriela Hearst.

The Uruguay-born, New York-based designer has been a vocal advocate for responsible design since launching her eponymous womenswear brand in 2015. Hearst was also recently announced as the new creative director of luxury fashion house Chloé.

At the presidential debate last September, Biden sported a Gabriela Hearst dress she had worn three years prior, in a nod to the worsening climate crisis and our need to be more conscious about how we consume fashion.