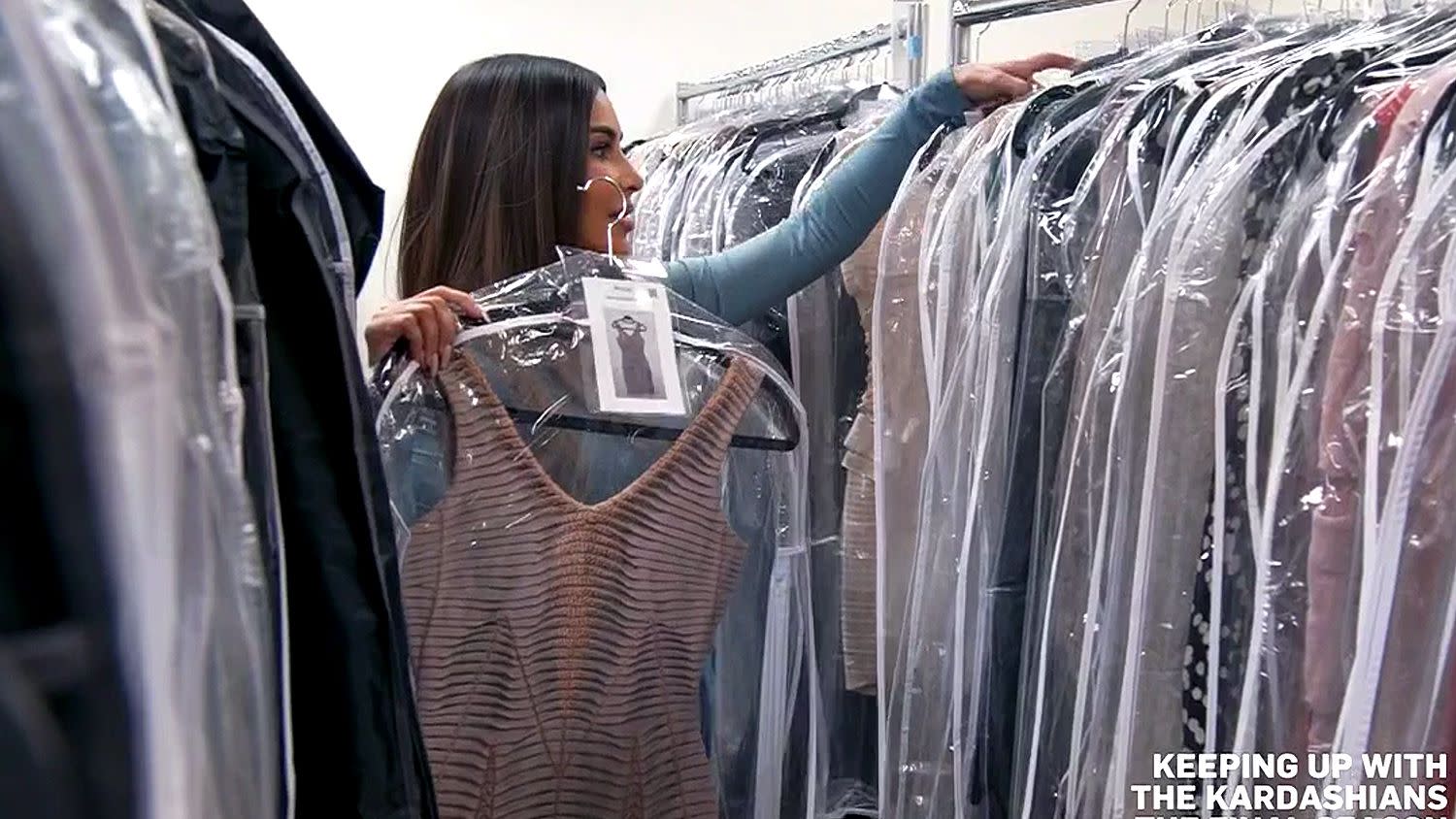 Kim Kardashian has always said she stores all of her old outfits in an expansive fashion archive, but she’s only ever shared small glimpses inside before — that is, until now. On Thursday night’s episode of Keeping Up with the Kardashians, the star brought back serious style nostalgia by taking viewers inside her archive closet.

Kardashian, 40, brought Scott Disick along, 38, as she went inside the massive room to select a sentimental item to put in the family time capsule they planned to bury in Khloé Kardashian‘s backyard.

“Oh my gosh, this is so fun to see,” Kim said as she walked into the closet filled with racks of designer looks covered in protective garment bags and labeled with photos of the event she attended. “So my sisters explained that they want to do a time capsule and I think it’s such a cute idea. I really do. So I’m going to see if I have a little Keeping Up with the Kardashians memento that I can put in this time capsule.”

As Kim scanned the racks to examine the outfits, Disick pulled out one black and white dress that he remembered right away. “Oh this one was legendary,” he said. “It’s like walking down memory lane over here.”

In addition to Kim’s memorable outfits, like the lavender bridesmaid gown she wore to sister Khloé’s wedding to Lamar Odom and all of her Met Gala looks, the star stores boxes filled with all her magazine covers, old fragrance launches and other business projects she’s worked on over the years. “Oh my god guys, I have the best archive,” Kim said.

The SKIMS mogul pulled out one houndstooth dress from a rack and held it up to Disick, asking him if he could recall when she wore it. He couldn’t figure it out, so she filled him in. “Kourtney and Kim Take New York season 1, no season 2. I blended with the chair!” she said.

“I mean this is its own time capsule. I’ve saved everything. So I have every look, every dress, every event. I love it cause it’s like going down memory lane,” Kim said during a confessional interview. “It’s all so special just to see it.”

As they continued through the closet, Kim called out more memorable outfits, including a white dress she wore on a “trip to Rome” with ex-husband Kanye West, a lace midi for her “Tao birthday” and a dress from a Fendi campaign.

Ultimately, she decided to grab a bottle of her first-ever eponymous fragrance (launched in 2009) for the family time capsule. “First of all, it’s literally one of my favorites but it’s also the first project that I worked on without my sisters. I feel like it was such a big part of this show,” she explained. “That was a huge deal for me to step out and do a venture on my own when I didn’t really have the confidence.”

Kim’s fashion archive has grown significantly since she first showed a glimpse of it to fans back in 2017 via Snapchat.

“Remember all this stuff?” she asked at the time, before listing some of the looks. “Prince concert… look at this gown from the cover of Vogue from Alber Lanvin… my Met dress… I wore this to the Balmain show…”

“It’s all labelled,” she added, talking through more racks. “I wore this in Paris once… Vegas on my birthday… Art Basel…. Jay Leno… Do you remember this Grammy dress I wore? This Elton John Oscar party dress? Golden Globes party…”

Kardashian said: “The fun part is I kept everything — all for memories. Even when Kanye thought he cleaned out my closet, I kept it all secretly for my daughter one day.”