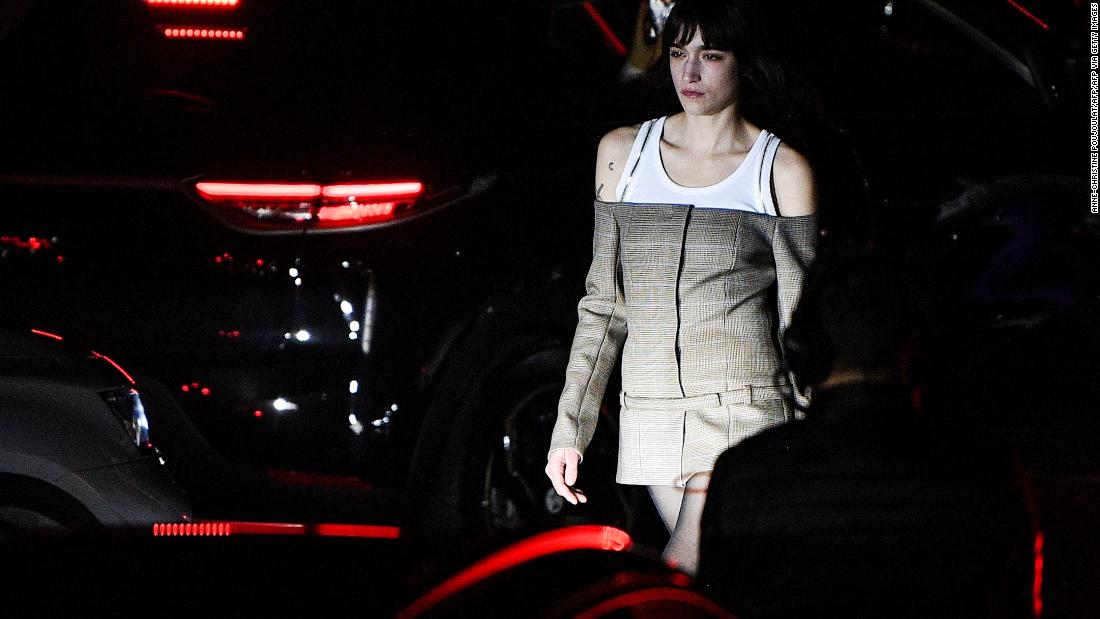 Over the past year, fashion collections have been shown primarily through video and ultra-limited, socially distanced live presentations due to the ongoing pandemic. Now, a drive-in runway show can be added to the fashion world’s creative workarounds thanks to French fashion brand Coperni.

On Thursday, during Paris Fashion Week, Coperni co-founders Sébastien Meyer and Arnaud Vaillant ushered in a fleet of 36 cars carrying 70 guests into the 20,100-seat AccorHotels Arena in Paris. Drivers used their headlights to illuminate models walking down between them in the brand’s autumn-winter 2021 collection.

Models walk between rows of cars at Coperni’s autumn-winter 2021 show, staged at the AccorHotels Arena in Paris. Credit: ANNE-CHRISTINE POUJOULAT/AFP/AFP via Getty Images

The show was live streamed exclusively on Instagram using the app’s new Live Rooms feature, which allowed the designers to film from three different perspectives simultaneously. Phones recorded the scene on the runway and backstage, while fashion commentator Louis Pisano shared his view — as well as his off-the-cuff commentary — from inside one of the cars.

Because of the restrictions around travel and gathering, the drive-in format was the “best way to do something [creative] while being safe at the same time,” said Vaillant in a video interview before the show.

Though online streaming helped share the collection with a wider audience, Meyer said the small attendee list — a mix of journalists, celebrities, influencers and friends — was an integral part of the show.

“Since a year ago, we’ve all been stuck in front of our iPhone and in the digital world. Sometimes, it’s important to feel the (sense of) humanity and to share an experience,” he said. “I think (the runway format is) the best celebration of fashion, and we need to keep this moment because it’s magical.”

Coperni’s latest collection was inspired by Paris’ nightlife and the comfort of a night in. Credit: ANNE-CHRISTINE POUJOULAT/AFP/AFP via Getty Images

The collection, the designers explained, was a two-pronged ode to the night, inspired by both Paris’ pre-Covid-19 nightlife scene (the techno soundtrack was sorted by Clara 3000, a DJ and friend of the duo) and the comfort of a night in. That meant outfits leapt from skin-tight mini dresses, thigh-high leather boots and bold-shouldered blazers to flowing trousers and statement coats cut from fluffy fabrics.

“It’s an answer to what we are living (through) now, because on one side we really want to be sexy again and to have fun… and on the other side, we’ve been wearing pajamas for a year,” Vaillant explained. “We want to blend these two silhouettes and two aspects.”

Models pose backstage prior to the show. Credit: ANNE-CHRISTINE POUJOULAT/AFP/AFP via Getty Images

The drive-in runway isn’t the first time Meyer and Vaillant challenged the conventions of the runway show. In September 2019, Coperni skipped the runway and projected their spring-summer 2020 collection onto the walls of Apple’s Champs-Élysées store during a public talk; and for their spring-summer 2021 season, they invited mask-wearing guests to the rooftop of the 690-foot Tour Montparnasse — one of Paris’ tallest buildings.