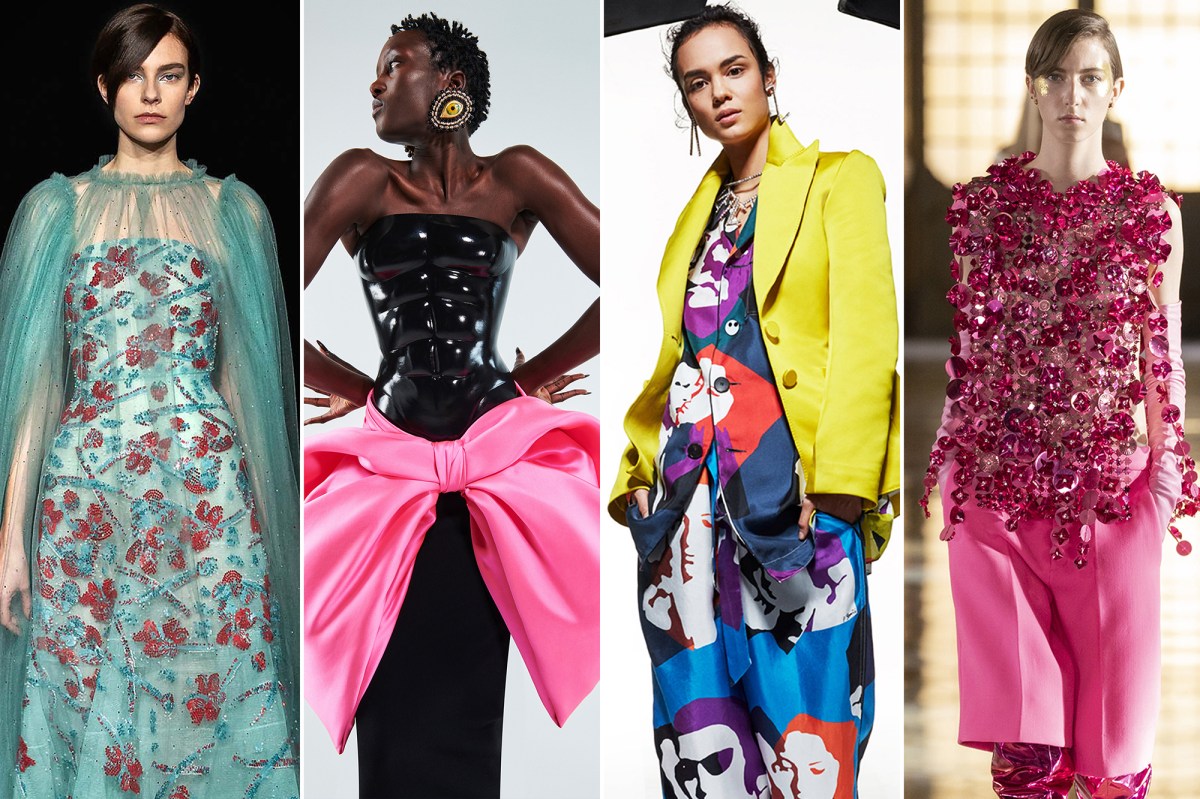 As the second Digital Couture Week comes to a close, designers proved that — despite logistical restrictions brought on by the coronavirus pandemic — imagination and commitment to the finest craft in fashion knows no bounds.

Glamorous gowns were aplenty, video presentations more vibrant than ever, some celebrities even sat front row (remotely, of course).

Below, a roundup of the week’s most magical moments.

All the pretty horses

Not one but two Parisian houses featured a white horse in their shows. At Dior, a horse with a long white mane appeared throughout the tarot-inspired collection, which featured Renaissance-like gowns, embroidered capes and delicate, sheer dresses. At Chanel’s bohemian wedding-inspired outing, the finale model — dressed in an ivory satin and pearl-embellished bridal gown, complete with a veil — stepped off a white horse and then walked before a socially distant VIP front row that included brand ambassadors Penelope Cruz, Lily-Rose Depp and Vanessa Paradis.

After almost a year of life in lockdown, many of us have abandoned fancy footwear and surrendered ourselves to shoes that are easy to slip on and off (and preferably lined in shearling). But at Valentino, nearly every model walked in a pair of sky-high platforms. Colorways ranged from muted taupe to eye-popping metallic pink, anchoring looks that might feel more casual given that it’s couture (think blazers and sweater vests styled with culottes and slim-fit skirts). But as always with creative director Pierpaolo Piccioli, the devil is in the details: tinsel-trimmed trenches, 3-D floral embellished tops and a mesh gown topped with a pearly hood. Hats off to Piccioli for (yet again) taking his vision for the storied house to new heights.

There was no shortage of glamour

Couture is all about the fantastical: from Schiaparelli’s surrealist six-pack bustiers and Giambattista’s larger-than-life ballgowns to Armani’s glittering capes. But topping them all was Iris van Herpen, whose inventive collaboration with NYC-based environmental group Parley for the Oceans “upcycled” what it called “marine debris” and turned it into fabric. Shout-out to newcomers to the couture schedule, Beckett Fogg and Piotrek Panszczyk of NYC-based label Area. Their party-ready riffs on suiting (starring Precious Lee) are a refreshingly modern take on couture, right down to the duo’s made-to-measure drops. How haute.

The return of Alber Elbaz

After a five-year hiatus, one of the industry’s most beloved designers, Alber Elbaz, made a welcome return to the fashion calendar. Literally. In a mock-documentary video dubbed “The Show Fashion” and released by Elbaz this week, cameos from Marc Jacobs, Anna Wintour and Rick Owens expressed pure joy that the Israeli designer is back. (The feminine, cocktail-inspired creations he designed during his 2001-2015 tenure at Lanvin are still dearly missed.) Working under the label AZ Factory — a nod to the first and last letters of his name — Elbaz explores femininity, practicality and playfulness, all with the idea of dressing conveniently at home. The results? Stretchy black dresses (matching bow optional), athletic shirts and leggings topped with one-shoulder satin frocks, plus whimsically printed pajama sets popping out under brightly colored blazers. Sizing ranges from XS to XXXL and falls under a price point between $300-$1,900. Welcome back, Elbaz.

Kim Jones knows how to cause a stir — he is, after all, the mastermind behind the Louis Vuitton collaboration with Supreme. He’s also responsible for the hottest sneaker drop of 2020. So it should come as no surprise that for his debut Fendi collection, all of Jones’ supermodel friends turned up to support IRL. During a global pandemic, no less. The runway show opened with Demi Moore and closed with Naomi Campbell. In between came Bella Hadid, Kate Moss, Cara Delevingne and Christy Turlington. They all donned Jones’ first takes on couture: black pant suiting, liquid-like gowns, or a marrying of the two (see Turlington’s caped suit). Jones’ first outing for the Italian label comes while he simultaneously churns out widely coveted menswear collections under Dior (each of which is consistently chock-full of It items), a Herculean role he has overseen for the last three years. We can’t wait to see how he fares in both the menswear and womenswear spaces moving forward. Super, indeed.