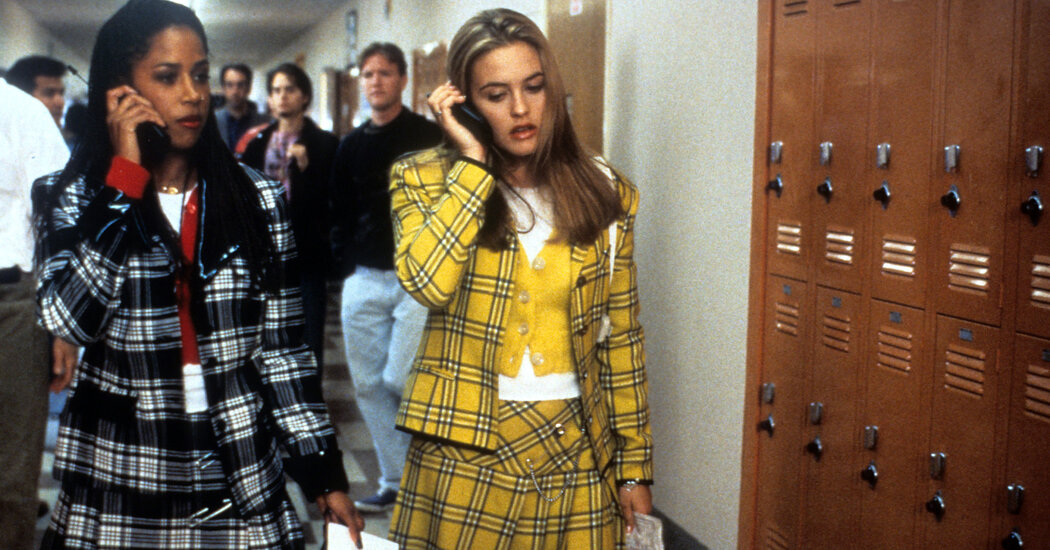 I wonder what you think about all the 1990s trends coming back? I see those trends everywhere. (It brings me back to Contempo Casuals and Wet Seal times.) And as a member of Gen X, I have feelings of jealousy, like: “I lived through it first.” But do you belong to the “if you wore it once, you can’t wear it again” team, which says that only the young can do nostalgia dressing, or to the “once again, for old time’s sake” team?

As far as I am concerned, when Harry Styles wore a yellow plaid Gucci blazer and lavender feather boa to perform at the Grammys in apparent homage to Alicia Silverstone’s character in “Clueless,” it was final proof (if any were needed) that the ’90s, that decade of grunge, slip dresses, knee socks, chokers, tracksuits and oversize blazers (well, hello, Balenciaga), were, as you say, back in fashion.

You may feel as if the ’90s are dominant at the moment in part because designers are generally fascinated with the clothing they grew up with and that formed their aesthetics. That means that as millennials increasingly grab attention and creative director positions (and there are a lot of them, as we noted in this story), they’d inevitably want to try their hands at reinventing the influences of their youth. Bingo, the ’90s return.

But the truth is, the days of a single, overriding trend are long gone. The production cycle of both pop culture and pop clothing is so fast and so diffuse, the sharing of favored imagery so constant and creator-driven, that you can find examples of pretty much any style at any point. That’s why the conversation about skinny jeans vs. — yes — ’90s baggy jeans is relatively moot: Both options exist at the same time. The rise of the latter does not negate the validity of the former. You just have to decide which one is right for you.

And then decide: Can you go home again? Thomas Wolfe said no — indeed, he wrote a whole book about it. Perhaps, as with literature, so with fashion. Though I would amend that to read: When it comes to dress, it’s really more that you can’t go home exactly as you once did. Home has changed, and so have you.

In other words, don’t go digging for your old clothes in the depths of your storage unit. Even Mr. Styles was playing with the idea of “Clueless” and making it his own, not reliving it. Our sense of proportions, juxtapositions and materials has changed since Bill Clinton was in the White House, not to mention any rules about what gender gets to wear what. And attempts to revisit the past often come accessorized with a healthy dose of irony.

After all, those who ignore history are doomed to repeat it. Those who learn from it, on the other hand, can wear their wisdom well.

Every week on Open Thread, Vanessa will answer a reader’s fashion-related question, which you can send to her anytime via email or Twitter. Questions are edited and condensed.